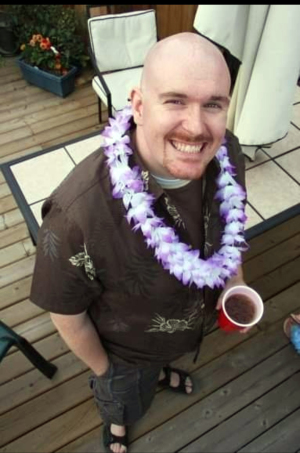 Michael McPherson, 46, of Calgary, AB, passed away suddenly and unexpectedly on March 27, 2021.

Michael, born June 13, 1974 to Daniel and Joanne McPherson in Calgary, spent most of his youth in Calgary. He later moved to Edmonton in his 20s where he met his late wife Nicole and her two children Alexa and Justice, who he regarded as his own. They had two more sons together, Gabriel and Gideon. They later moved to Prince George, BC, to be closer to Nicole’s family. In the summer of 2013, he tragically lost his beloved Nicole and their unborn son Nixon from complications during pregnancy. Michael also lost his first son Daniel McPherson in a train accident in 2012. During this time, Michael was a rock for his four remaining children and inspired awe in the people around him for his positive attitude and ability to keep living life to the fullest.

Michael was blessed to meet his second wife, Leah, in late 2013. In the same way that Michael was able to show unconditional love to his stepchildren, Leah became a mother to his, creating a beautiful family that also included her three children Kage, Kyra, and Deven. In 2014 Leah was diagnosed with thyroid cancer and once again Michael acted as the rock for his family, handling doctor’s visits and long-distance travel with grace. Thankfully, the cancer went into remission and Michael and Leah eventually moved to Calgary in 2019 where he could be closer to his own family and the varied nature of Alberta that he loved so much. He remained living in Calgary until his passing, going on many hikes and outdoor adventure trips with his family; providing endless support to his loved ones; and participating in a multitude of hobbies and interests that he was ultimately known for.

He had a passion for gaming in all forms and was rarely seen idle. He was exceptional at nearly everything he did, from his collecting of many, many, many flashlights, and his abundant hobbies and crafts.

Michael, also known as Oli Einarsson, Robert the Traitor, The Great White Bear of the North, and The Most Ferocious Kitten of Tir Righ, had a resounding passion for the Society of Creative Anachronism where he gained many brothers and sisters by way of his vigor in smashing shield walls, remarkable skills in the arts and sciences, infectious smile and just being a genuinely awesome guy. He was always eager to help any way he could with events and group business.

He had a great love for bushcraft and hunting and was always prepared for anything. If you needed it, he had it. He was so proficient with a bow that he was asked to join the Olympic team in his younger years but turned it down in favour of his academic studies at the time.

Michael put many of his skills to use as a volunteer for Search and Rescue for several years of his time living in Prince George. He also volunteered by teaching school children how to survive outside with the Hug-A-Tree program.

He was a fountain of knowledge, generosity, strength of character, and heart. If you needed advice, a laugh, a fire, or a beer he was always willing.

He is predeceased by wife Nicole and sons Daniel and Nixon. Hold them tight Michael, as we left behind hold each other now. Until we meet again.

Due to Covid restrictions, a memorial is being delayed until it is safe to gather in larger numbers.

To send flowers to the family or plant a tree in memory of Michael Scott McPherson, please visit our floral store.